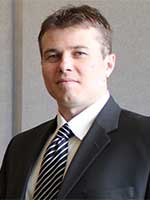 ‘Using Poorly Written Content to Silence Your Phones and Empty Your Inbox’ the subject of Nov. 20 workshop

HENDERSON, Nev. – Marek Biernacinski, president and CEO of Words by a Pro, will present “The Early Retirement Plan: Using Poorly Written Content to Silence Your Phones and Empty Your Inbox” from 7:30 to 9:30 a.m. Thursday, Nov. 20, as part of the Henderson Chamber of Commerce’s Roadmap to Success workshop series.

During his presentation, Biernacinski will discuss: why brevity is your worst enemy when trying to lose customers; ways to destroy your brand by using an ineffective voice; and how to edit your way out of a successful message.

A writer, editor and former journalist, Biernacinski co-founded Words by a Pro in 2010. With Biernacinski at the helm, Words by a Pro serves as an outsourced writing and editing company primarily for Web programmers, marketing/public relations firms and SEO companies. As such, Biernacinski and his team excel at becoming quick “experts” on subjects and industries across the board, writing and editing content in such a way that is both interesting to the reader and optimized for search engines.

In addition to his involvement with the Henderson Chamber of Commerce, Biernacinski also serves as a member of the American Advertising Federation Las Vegas board of directors.

Sponsored by the City of Henderson, the presentation is open to the public. Admission is free for members of the Henderson Chamber of Commerce and $25 for non-members. Walk-ins will be charged an additional $10. Those interested should RSVP online at hendersonchamber.com by Tuesday, Nov. 18.

The Roadmap to Success workshop series covers all aspects of business critical for business owners to understand and properly execute to stay afloat, especially when times are tough. The series begins in September and continues through May. It comprises 16 workshops covering topics including finance, human resources, law, marketing, and operations, sales and technology.

The Henderson Chamber of Commerce Foundation is a non-profit corporation organized to manage and distribute funds and resources to further the development of the community through activities that are exclusively charitable, scientific, or educational. The Foundation is responsible for the creation and success of both the Henderson Business Resource Center (a business incubator), and the Leadership Henderson program.