John Hambrick served as panelist at the Baku International Humanitarian Forum; human trafficking designated as a ‘weapon of terror’ 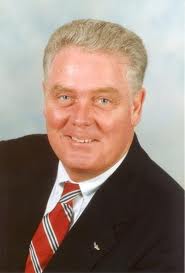 LAS VEGAS – State Assemblyman John Hambrick (R-Las Vegas) recently returned from the Baku International Humanitarian Forum, where he served as a member of a humanitarian panel discussing the global issue of human trafficking. Hambrick was one of two Americans on the panel, the only representative from the Western United States.

With the recent terrorist actions of ISIS (Islamic State of Iraq and Syria), the discussion focused on how terrorist organizations use human trafficking as a weapon of terror. The only answer is for organizations – religious and otherwise – to speak out against it.

Hambrick met with representatives from Latvia, Estonia, Indonesia, Russia and Egypt, among others.

“All the members of the panel spoke about different horror stories or problems,” Hambrick said. “This isn’t a problem that’s just in Las Vegas. It’s a problem all over the world. It was very enlightening.”

Hambrick was invited by Rafig Rustamov, vice counsel of the Republic of Azerbaijan, to participate based on his background as a champion for underage victims and a crusader against the crime of human trafficking.

The forum is an annual event of notable representatives of the political, scientific and cultural elite of the world community including famous statesmen, Nobel Prize winners, science experts and leaders of international organizations – all with the aim of holding dialogues, engaging in discussions and exchanging views on a wide range of global issues in the interest of all humanity.

During the forum, Hambrick participated in round-table discussions, constructive debates and the exchange of ideas as well as theoretical and practical knowledge. The panel’s goal was to be able to make recommendations to and provide information for international organizations, leaders of states, and individuals on the stemming the tide of human trafficking.

Hambrick moved to Nevada after retiring from a career in Federal law enforcement that spanned almost three decades. He served on the Presidential Protective Detail of the United States Secret Service and spent six years as an agent for the Immigration and Naturalization Service, eventually heading the agency’s criminal prosecutions for the Washington, D.C. field office. He went on to work in the Federal Inspector’s General office, where he led investigations of contract fraud, mortgage fraud, workers compensation violations and breaches of public integrity. Locally, he is the past president of Summerlin Little League and past chairman of the Clark County Republican Party.