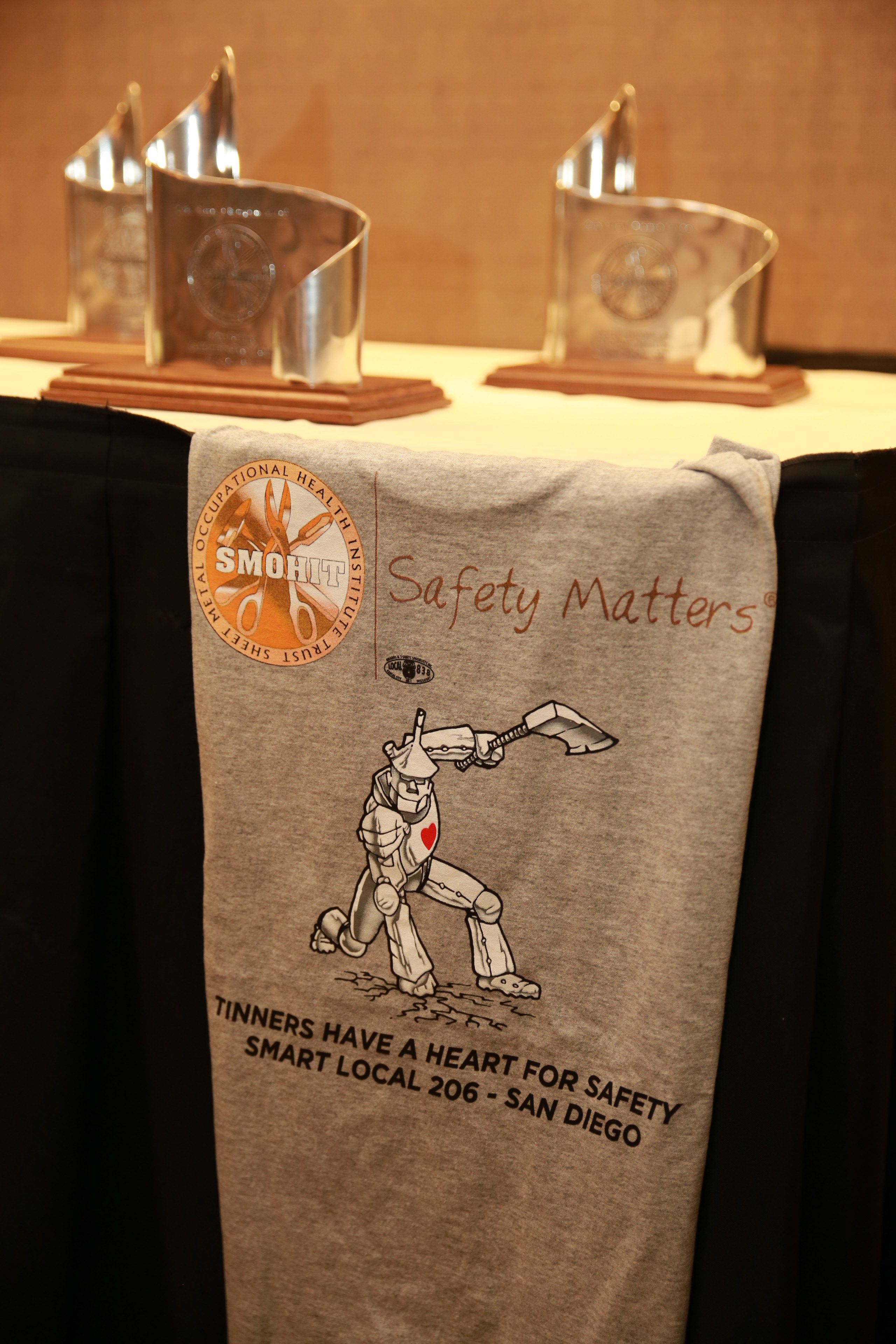 Conference, awards welcomed 30 members from across the United States

FAIRFAX, Va. – More than 30 contractors, training coordinators, business agents, business managers, safety directors, instructors, SMART and SMOHIT executives and strategic partners from across the country gathered for the second Safety Champions Conference and Safety Awards hosted by the Sheet Metal Occupational Health Institute Trust (SMOHIT) Sept. 12 and 13 in Scottsdale, Arizona. A two-day event this year, the conference featured keynote speaker Phillip Ragain, director of research and development for The RAD Group, and the discussion, “Generative Safety Culture and Mechanisms that Produce It.”

The conference’s second year was a continuation of last year’s discussion, “What is a Safety Champion?” said Randall Krocka, SMOHIT administrator.

“Our goal is to make safety as natural as breathing,” added Krocka during opening remarks. “We’re here to learn together and share ideas, because we’re all partners in keeping our people safe. It starts with leadership. This is a room full of leaders who take ownership of safety.”

During the keynote, participants worked together in a series of breakout sessions to discuss how to create a positive safety culture in the industry one contractor, and one training center at a time.

Ragain discussed the five rungs of the Safety Culture Ladder, from pathological, where safety is considered a burden and a nuisance, all the way up to generative, in which workers at all levels feel as if they are their “brother’s keeper.”

“We need to get to a place where people at all levels feel personally responsible for safety,” Ragain said. “Where the workforce is fully engaged. Where people take initiative to improve safety, even when their efforts go unrecognized. The thought process is, ‘We are never safe enough.’ It takes constant effort by everyone. And it all starts with leadership.”

Through the workgroup sessions, contractors, training coordinators, safety managers, and business agents and managers put their heads together to brainstorm ideas. One fact Ragain shared: people speak up only 39 percent of the time when they see an unsafe situation.

This led to an important question that teams were challenged to answer: How can leaders create a context in which people will be more likely to intervene during an unsafe situation?

“Sometimes it’s as simple as saying ‘Thank you for looking out for me,’ Ragain said. “Even if the person intervening is wrong, just saying that can drive the culture of intervention.”

“We’re working together,” added Kris Benson, an instructor at Local No. 66. “We all need to share in the responsibility of safety because it affects all of us.”

Winners of the second Safety Design Contest also were acknowledged, including Jeff King from Local No. 33 in Toledo, Ohio; George Plane from Local No. 67 in San Antonio, Texas; and Chris Caricato from Local No. 206 in San Diego.

Superior Air Handling won for the second consecutive year for its work at the Mixed Oxide Facility, known as The Mox Project, at the Savannah River Site. The company has reached a milestone of more than 1.75 million safety man-hours, which amounts to seven years without a lost-time injury. The company expects to hit 2 million this spring.

“These awards are for the guys. Without them, I don’t have a job,” said James Walton, safety manager and certified health and safety technician. “They’re the reason I get up and go to work every day.”

Through the labor-management partnership, Krocka plans to “think of this as an ongoing conversation” during the year that will continue through to next year’s conference, he said.

“We need to recognize this is an area where labor and management share the same goals. We all want to see our members go home every night with their fingers and limbs intact,” said Rich McCleese, general secretary/treasurer for the International Association of Sheet Metal, Air, Rail and Transportation (SMART) workers. “We all win when our members are safe and employed.”

Part of the initiative is SMART MAP (Member Assistance Program), a training program that educates members on how to help their peers find professional help for their problems and addictions. During training, members also are taught what avenues are available to them as union members, said Chris Carlough, SMART education director.

Programs like SMART MAP and the Safety Champions Conference have the same goal, said Michael McCullion, SMACNA director of safety and health.

“We’ve all come together with a common goal: to put safety at the forefront of our industry,” he said. “It happens when we take a team approach.”

The Sheet Metal Occupational Health Institute Trust (SMOHIT) was founded in 1986 to address the impact of decades-long asbestos exposure on those working in the sheet metal industry. To date, more than 55,000 sheet metal workers have been screened as part of its ongoing Asbestos Screening Program.

SMOHIT has since expanded its mission to operate on four separate but related tracks: monitoring and documenting the health of sheet metal workers as it relates to workplace exposures and hazards; providing safety information and training related to best safety practices on and off the job; acting as an aggressive advocate for the health and safety of its members with government and through likeminded allied organizations; and providing diet and exercise information to address the health and wellness of its members.

SMOHIT has adjusted its methods and messages to reflect feedback from local unions and the industry, and to address new safety challenges as they arise. The organization works directly with the International Training Institute (ITI) to provide training programs for the unionized sheet metal industry.