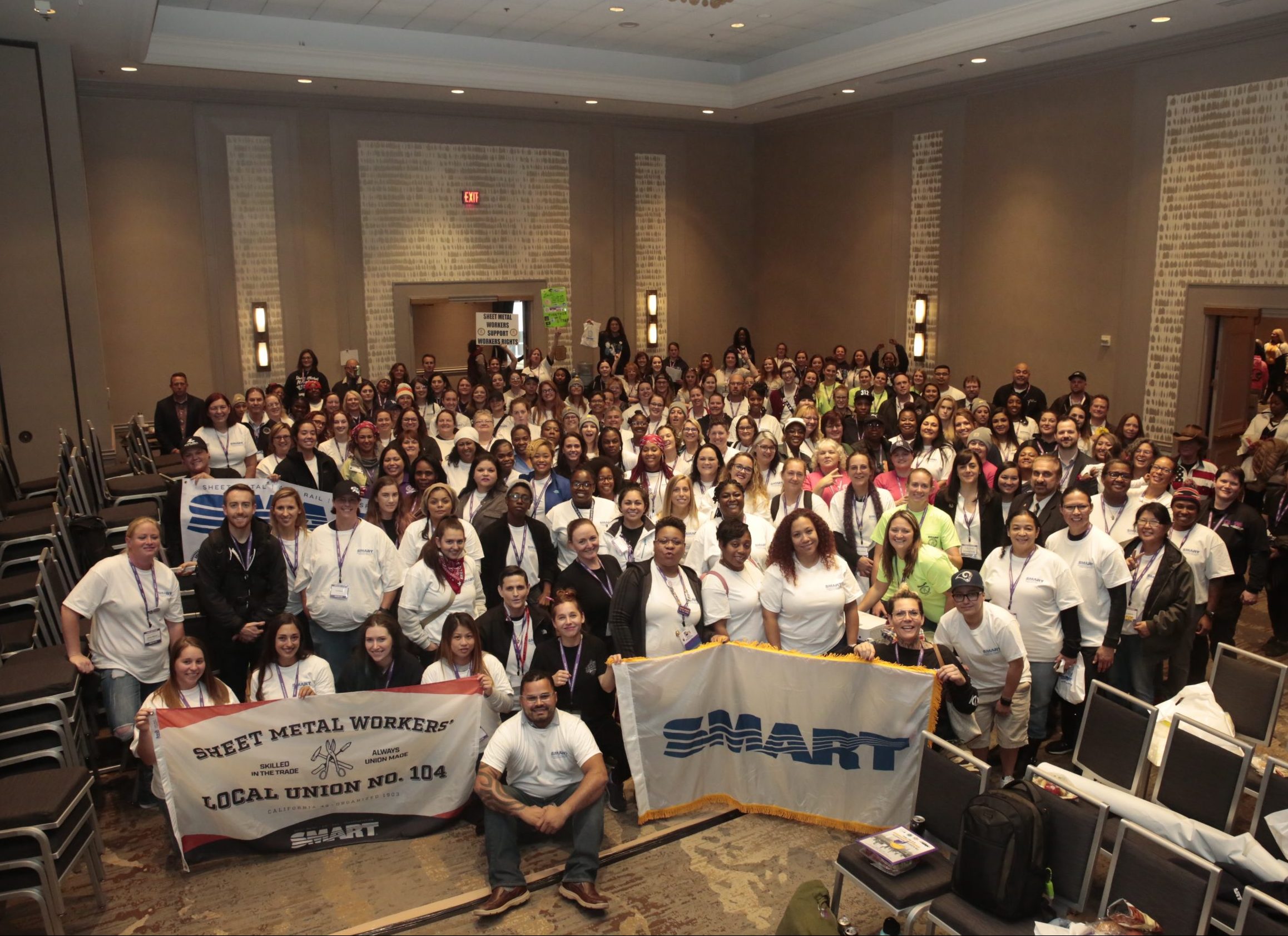 More than 2,700 union women — more than 200 sheet metal sisters — and their allies gathered Oct. 4-6 in downtown Minneapolis for Trades Women Build Nations, a meeting of the minds for union women across the globe.

The International Association of Sheet Metal, Air, Rail and Transportation Workers (SMART) General President Joseph Sellers, Jr. served as one of the opening speakers and provided support and a pledge to simply do better.

“We will continue to work hard. We have a lot of work to do. We will roll up our sleeves,” he said. “We will make sure we are more inclusive, better in diversity, and we will continue to move our international in that fashion. We will do better tomorrow than we did today.”

Sellers gave credit to the SMART Women’s Committee, which was instrumental in the passing of amendments and resolutions aimed at diversity and fair treatment for all members at the SMART Convention, which took place last summer. One such resolution was to double the number of SMART women by the next convention in five years. This includes finding training and mentoring classes to guide female members up the path of leadership in the workplace and in the union.

“How do they get involved in the union process? Become a part of the executive board, become a representative, become a business manager, become a general president?” he said. “How do we get that done?”

The first day of the conference is designated for community service, and Local 10 SMART Army and the SMART Women’s Committee coordinated a blanket project with 100 to 150 SMART union sisters and brothers throughout the evening. For the project, fleece material was cut to size, and two pieces were tied on all four sides to create a double-layered blanket. More than 55 blankets were created that evening with additional to be completed by the Women’s Committee of Local 10.

The blankets were donated to People Serving People, the largest and most comprehensive homeless shelter for families in Minnesota, a shelter where 62 percent of the guests are children or youth.

“Once I created a flier requesting support from locals, Marc Norberg (assistant to the General President) sent it to President Sellers, who sent out a letter to locals encouraging support,” said Vanessa Carman, SMART Women’s Committee event coordinator and member of Local 66 in Western Washington. “There were over 14 boxes of donated fleece collected at Local 10. Sisters and attendees also brought fleece to the event.”

The women of Local 10 in Minnesota and Local 28 in New York along with union brothers such as Colin Beere, Local 10 SMART Army representative, volunteered to help organize, plan, accept and store donated materials and deliver finished blankets.

Throughout the two-day conference, SMART locals and women’s committees stopped by the SMART booth, manned by staff members of the International Training Institute (ITI), SMART’s education arm. There, women from all trades engaged in conversation, compared notes and collected stickers from unions across the country, a favorite side-activity at the conference.

“I’ve attended the conference before, but from behind the booth I could really see how much it’s grown,” said Larry Lawrence, field staff with the ITI. “Although the number of women in our union is growing, it’s still relatively small compared to the number of brothers. It’s important for women to see, hear and meet with other women in the trades. That camaraderie is important not only to those women, but to the future of our industry.”

Apprentices, the newest members of SMART, had the opportunity to not only network with fellow members of SMART, but with women from all the building trades including plumbers and pipefitters, electricians, laborers, operating engineers, carpenters and iron workers. They touched base with some who, in their words, had it far worse than they have experienced as SMART members.

Recruitment and members were on the minds of apprentices from Local 67 in San Antonio and Austin, Texas.

“I didn’t have direction. Had I found this years ago, I think it would have been better for me, but nobody told me about it,” said Danielle Espinoza, a second-year apprentice. She suggested going to “the impoverished places and those places where people are who may have made mistakes (to recruit).”

Melina Wright, a third-year apprentice in Austin, was that woman who thought she was going to deliver groceries as her career.

“I was in a women and children’s home, and I was fighting a felony, so I was having a hard time,” she said. “A woman actually got me into the trade and said, ‘Come do what I’m doing,’ and I did, and it was a whole new thing. Nothing in life is easy, but just knowing you have the opportunity — I’d like to pass that along.”

“She was a mom who went through school. She worked her way up the ranks. You can climb that ladder. She’s made that possible,” said Espinoza of Friesel. “It makes you want to step it up a bit more, keep that going.”

“I feel like I can go home and recruit people,” Wright said. “I have some ideas I can’t wait to set into motion.”