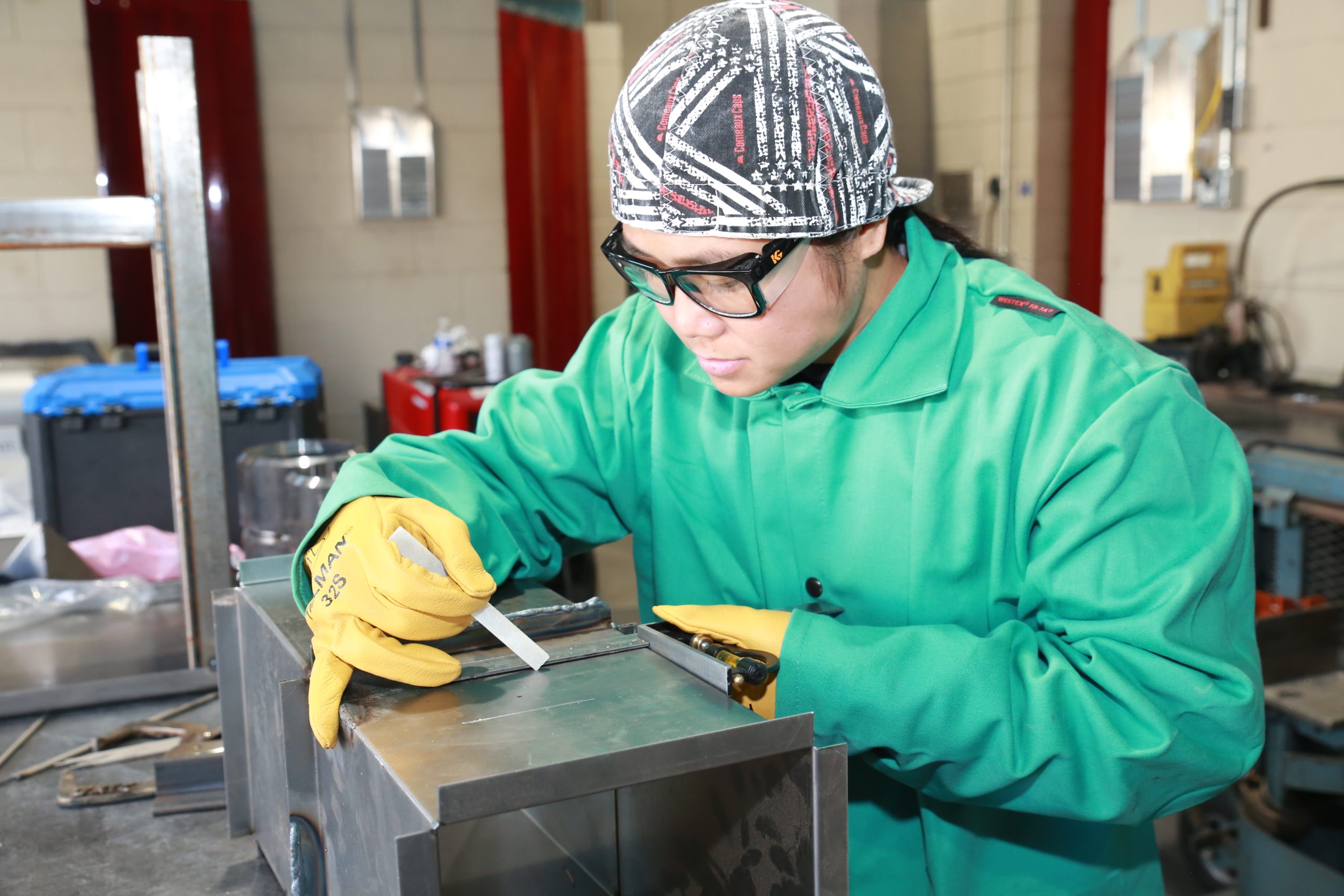 Staff Sgt. Antonette Ventura’s path to becoming a sheet metal journey person took an unexpected detour when she was deployed to Saudi Arabia in late 2020, during the middle of her apprenticeship. Thanks to the support she found at the International Association of Sheet Metal, Air, Rail and Transportation (SMART) workers’ Local 88 training center in Las Vegas, however, her confidence in finishing the program never wavered.

Growing up in Hilo, Hawaii, Ventura is the first member of her family to venture into the unionized trades. She moved to Las Vegas to seek her future among the opportunities in the growing city, then found Local 88 while doing her job search. When she got the approval letter to come and test, she went in and performed well on the exam as well as the interview. The first two years of her apprenticeship went smoothly, and she took to the work — impressing her instructors as well as Ed Abraham, Local 88’s training director.

“She’s very hard-working, very knowledgeable and willing to learn,” Abraham said. “I am hopeful that she would be willing to be an instructor in the near future.”

That all had to be put on hold when she was called up as a reservist and found herself facing almost a year in the Middle East. Ventura joined the Air National Guard in 2007 and has served for the past 14 years, based out of March Air Reserve Base in Riverside County, California. For many in the National Reserves, a long deployment can mean a total uprooting of one’s life trajectory: cars are sold, leases terminated and jobs or schooling are put on hold indefinitely.

“There really wasn’t an end date because things can happen. For security purposes, you just don’t know — they don’t want people posting dates on social media and such,” Ventura said. “I was worried about not being able to finish my apprenticeship on time because I didn’t know how the situation was going to be handled.”

Following a conversation with Abraham, Ventura said she had real peace of mind. She was assured that her place was secure and the union would work with her as she served overseas and help smooth the transition when she returned. The contractor she has been working with in Las Vegas, Kamran Metalworks, was likewise very accommodating.

From November 2020 through September 2021, she was deployed to Riyadh Air Base, in the capital of Saudi Arabia, helping support Operation Freedom’s Sentinel in her capacity as a heating, ventilation and air conditioning (HVAC)-refrigeration technician. With the pandemic crisis in full swing and vaccinations becoming available during that time, her work was vital in keeping the medicine at the ultra-cold temperatures early doses required. Her duties also included maintaining boilers and air conditioning systems throughout the base and working with contingency equipment.

Abraham — or “Schoolhouse Ed,” as Ventura calls him — helped her navigate the regulations on how activated members of the National Guard or Reserves are handled within the union. Her membership was temporarily changed to a special limited membership and dues were paid by the union during deployment. Abraham also made sure to reach out on a monthly basis while she was deployed to check up on her.

“That meant a lot,” she recalled. “It made me feel very connected.”

Ventura said there were conversations among the many personnel on the base about jobs and future work, and during these talks she could not help but sing the praises of SMART and Local 88. “One of the guys . . . after hearing me talk about it, he started getting interested in trade work and researching it,” she said.

In her fourth year now, Ventura looks forward to completing her sheet metal apprenticeship in July and hopes to work in either the service or architectural sides of the trade. Although she loves Las Vegas and the people she has met here, she knows a union education in sheet metal affords her the opportunity to go many places.

She also said she would encourage anyone — especially women — not to be timid but rather jump into a career such as sheet metal.

“Don’t be afraid to try,” she said. “You won’t unlock your potential unless you take that first step. I’m so glad I did.”

Abraham agrees that women like Ventura make the trade stronger, and he was happy to help her get back up to speed so she can complete her apprenticeship as scheduled.

“She is doing amazing in the program and any company should be glad to have her on their team,” he said.

Sheet Metal Workers Local 88’s training center, located at 2540 Marco St., is one of 148 similar facilities throughout the United States and Canada. It’s four-year program trains apprentices in AutoCAD, air balancing, refrigeration/service, welding and HVAC design fabrication and installation. On the job site, through partnerships with local contractors, apprentices gain skills in the installation of architectural sheet metal, kitchen equipment and duct for heating and air conditioning systems in commercial and residential buildings.

Upon completion of the program, apprentices graduate with an associate degree, career and zero college debt. For additional information on Local 88, visit 88training.org or call 702-632-3014.