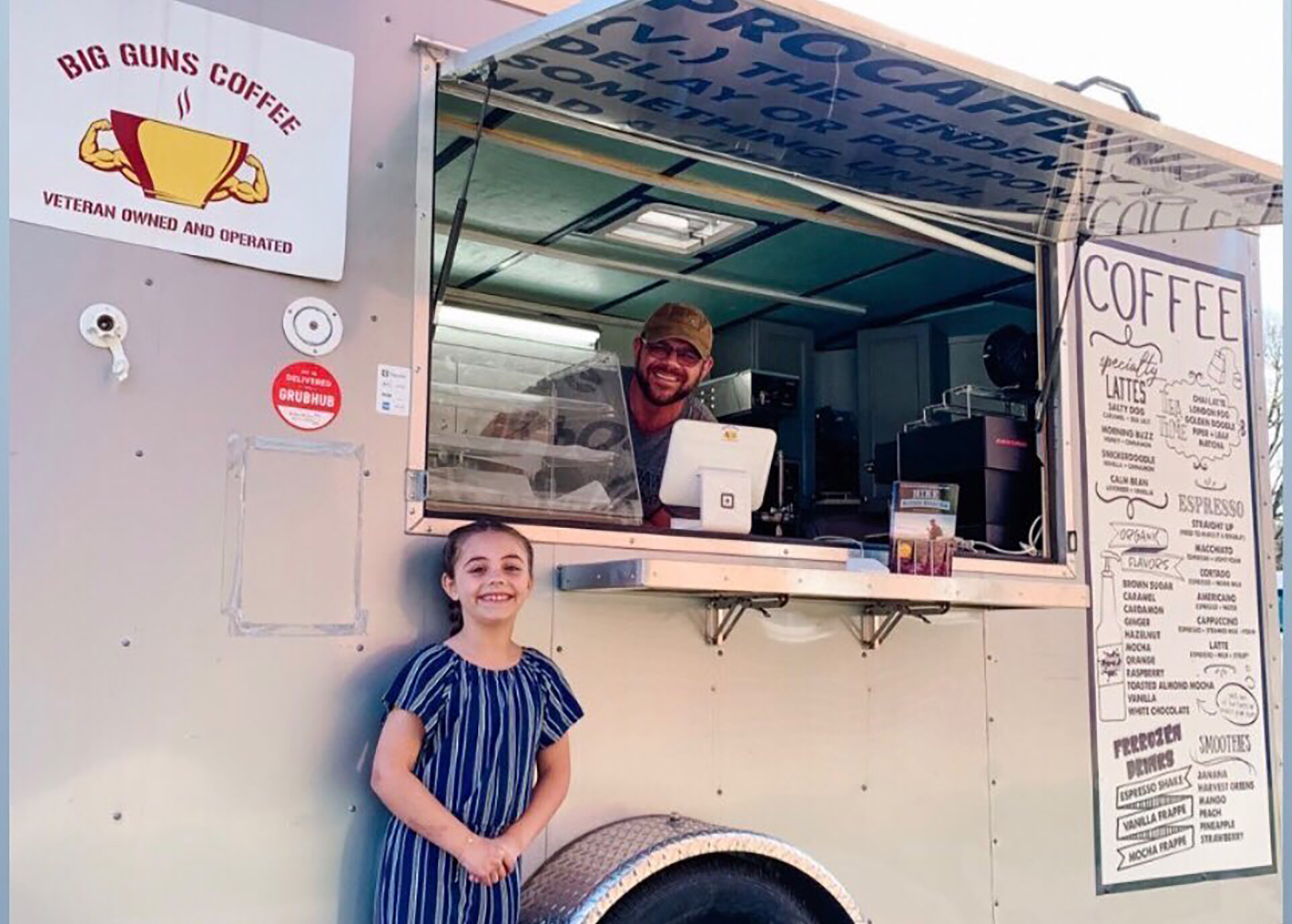 Local daddy-daughter duo serve coffee with a side of motivation

This Father’s Day, 7-year-old Charli Johnson will likely be spending the morning, like all Sunday mornings lately, working with her dad, TShane Johnson, serving up fresh coffee along with delicious homemade pastries or Belgian waffles they create on-site in her coffee truck.

You read that right, it’s the young girl’s fledgling coffee business. Big Guns Coffee — “big guns” as in her father’s “big muscles” — began as an idea Charli came up with just before her seventh birthday, when her father challenged her to envision a business she’d like to start.

“Twenty minutes later she had a name and had drawn out a logo,” her father said. Though he set up the licensing and does the driving, of course, he defers to his daughter as the force behind the operation. “I’m really just an employee of hers, I’m an extension of the independence of a young woman who says ‘I’m going to do something.’”

Two months after that initial idea, the Big Guns Coffee trailer was operating from its regular location at 13501 Dorman Road in Pineville, 6:30 a.m. to 12:30 p.m. every day, and a month later the two of them began roasting custom blends for individual buyers as well as a resort partner.

They go over sales numbers together every two weeks or so, and tips go into Charli’s piggy bank, which she said she eventually wants to use to build a house — not buy a house, build her own house, she specified.

“She says I can live in the basement!” Johnson added.

As she finishes up first grade, Charli is reluctant to commit to any one career for her future, but she’s interested in how Big Guns Coffee can grow. She credits her father as a big source of encouragement and hands-on learning.

“He’s goofy, but when you ask him something he’s really nice and doesn’t complain,” she said. “He answers you.”

An entrepreneur, author and motivational speaker, Johnson knows the importance of making an experience the foundation for any business. A people-over-profits approach has always been his guiding principle. So, in brainstorming, the two of them recalled how stopping for coffee was an enjoyable moment for parents and kids — Charli would pick out a bagel or pastry, and her mom or dad would get a cup of coffee. During the pandemic, people also craved connection and conversation, so providing great coffee at a great price, along with genuine, motivational face-to-face engagement became a top priority for Big Guns Coffee.

“It’s like being on the stage 65 times a day,” Johnson said, admitting that he feels just as energized by the interactions as the customers do. “You can turn people’s day around, from negative to positive, before they even take a sip.”

A driving principle behind Big Guns Coffee is something Johnson abbreviates to R-S-R, or “Roast-Serve-Recycle.” Not only is the packaging biodegradable and environment-friendly, but all the truck’s kitchen waste, such as eggshells and coffee grounds, is composted into rich soil for local gardens.

Right now, Charli is having fun. Her father, however, has big plans for her and the business.

There is a serious undertone to what he jokingly calls “a lemonade stand on steroids.” Johnson suffered traumatic injuries in his 20s, including a horrific motorcycle crash that left him robbed and left for dead — his heart stopped three times as doctors worked to save him. Although it seems intangible, instilling the business spirit in Charli is investing in her future, he said.

“Leaving her a business that can grow, and the entrepreneurial skills to prosper with it . . . that’s different than just money,” he added. “That’s a legacy, and it’s much more valuable.”

He wholeheartedly would advise other fathers to get involved with helping to build their children’s dreams. Helping a child create something can reignite that spark and start a new journey for both.

“Take massive action and make it happen,” as Johnson has urged in his motivational books. “The foundation of America is small business and family.”

Johnson, a Marine Corps veteran, is also a record-breaking athlete, entrepreneur, author, motivational speaker and fundraiser for various veterans’ organizations. In 2019 and 2021, he set new marks for the Guinness World Records for the fastest 1-mile trek carrying a 100-pound pack and the number of push-ups completed in one hour, respectively. Both records have since been broken.