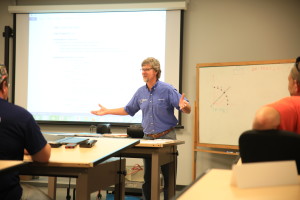 FAIRFAX, Va. – It’s difficult to prepare for the future when it’s uncertain, but when an industry knows what’s on the horizon, it just makes sense to get ahead of the curve. This summer, nearly 100 sheet metal instructors traveled to St. Louis to learn how to teach lagging. The 48-hour, six-day class instructed by Jeff Peterson, general foreman for API Group Inc., gave seasoned professionals the technical aspects of the classroom and the hands-on training in the shop to take skills back to their training centers.

Lagging is a metal covering used to protect the insulation around pipes, tanks and other high temperature equipment from the elements. Lagging can commonly be found in power plants, nuclear power plants, paper mills, steel mills, refineries and other plants.

And it’s in demand. 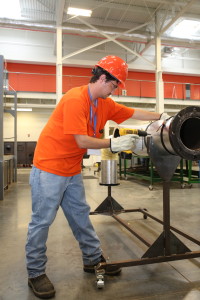 API Group, the Minnesota-based, multi-billion-dollar parent company for more than 40 independently managed construction companies worldwide, employs 400 to 500 workers specifically for lagging throughout the United States at any given time. Currently, API has eight to 10 job sites across the country where sheet metal workers who can perform the skill are working, Peterson said.

“When we come into an area, we want the area to have training available, so they can train these guys, and we don’t have to spend time doing it,” Peterson said.  “Without a doubt there is work all over the U.S.”

The course, developed by Peterson and the International Training Institute (ITI), the education arm of the unionized sheet metal industry, is meant to get ahead of the market and pass the training onto sheet metal workers at the local to take the work when it arrives.

The question is: Does the training attract the work or does the work demand the training? Steve Kowats, ITI staff and program coordinator, said it can work both ways. The more proactive approach, however, is to train for the work, even when it’s not readily apparent.

“Whether or not a given part of the country thinks they have this or that type of work, it’s out there,” he said. “There are existing customers out there, and they shouldn’t be neglected.”

Currently, lagging is critical, and demand is increasing because more energy infrastructure is being constructed across the country. If contractors don’t believe they have any lagging work in their area, they could be looking in the wrong places, Kowats said.

“This way, sheet metal workers don’t have to turn down work because they don’t have the proper training,” Kowats added. “The program allows instructors to be proactive in regards to needed skills on the job sites rather than reacting to contractors when they need workers with certain skills and certifications.”

The skills the instructors learn during the course aren’t much different from the skills they already have to create sheet metal fittings and components. It’s just a little more advanced, Kowats said.

“At the end of the day, the instructors take this knowledge back to their locals, students and training centers. Then, those workers take their skills to the job sites, which helps the contractors bid on jobs,” said Mike Harris, program administrator for the ITI. “It all works together.”

In Youngstown, Ohio, sheet metal workers are required to know many skills in order to keep working – from hanging ductwork and installing kitchen hoods to welding and industrial work. Kevin Rogers, training coordinator for Local 33 in Youngstown, wants to give his apprentices and journeymen all the tools necessary to keep steadily working. 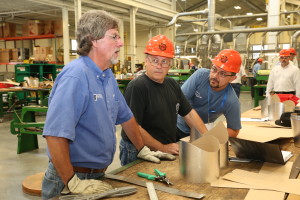 The lagging program serves two purposes for Rogers and his program – apprentices will learn welding skills as they create the mock-ups this fall in time for the lagging classes to take place in the spring. With two power plants scheduled for the area – and one to break ground next year – Rogers wants to get his students ahead of the game.

“I just want to do what I can to see that the next generation has the same prosperity as I had,” Rogers said. “If I can do something with the lagging program, and keep them working, I’m all for it.”

This summer, participants received a completion certificate at the course’s end. However, an exam-based certification for lagging is on the horizon in the next year, said Chuck Holt, administrator for the National Energy Management Institute Committee, which scopes emerging markets for the unionized sheet metal industry.

In the meantime, instructors are preparing their locals for extra work; at least, that’s the goal.

“If I can catch wind of something new and get ahead of the curve on training, I owe it to my guys to do that,” Rogers said. “I’m glad I went to the lagging class because it was well worth it.”

ITI supports apprenticeship and advanced career training for union workers in the sheet metal heating, ventilation, and air conditioning (HVAC), welding and industrial, architectural and ornamental, and service and testing, adjusting and balancing industry throughout the United States and Canada. Headquartered in Fairfax, Virginia, ITI produces a standardized sheet metal curriculum supported by a wide variety of training materials free of charge to sheet metal apprentices and journeymen.