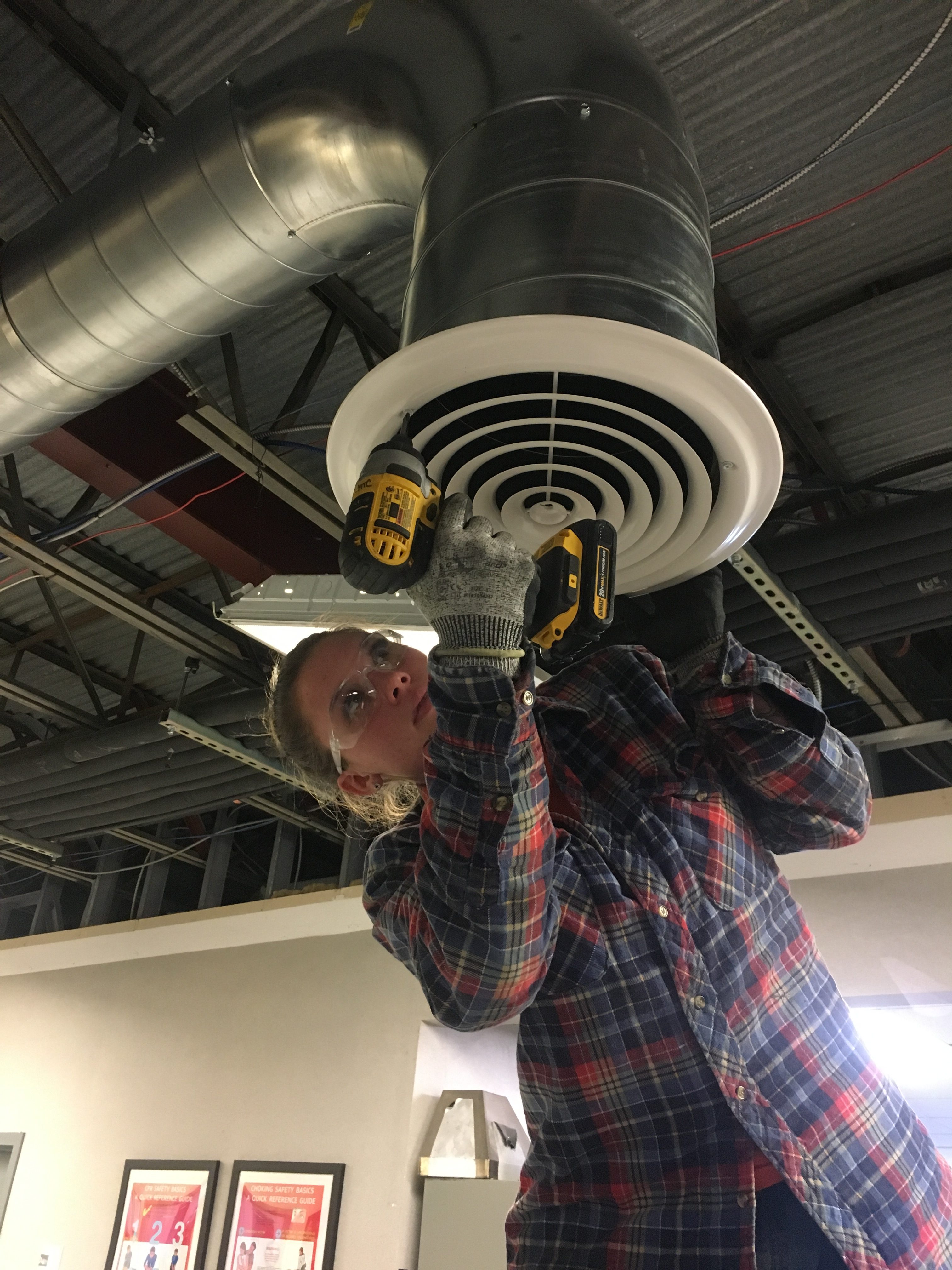 Rogers, a sheet metal apprentice, aims to introduce the trade she loves to others

INDIANAPOLIS – If you happen to live in the Indianapolis area, and are approached by a spunky, 5-foot-2-inch young woman about considering unionized sheet metal as a career path, you’ve officially met Catie Rogers, apprentice for SMART Local No. 20 and self-proclaimed recruiter of female apprentices to building trades.

SMART is the International Association of Sheet Metal, Air, Rail and Transportation Workers.

Her passion is her guiding force. As a fifth-year apprentice, Rogers is the only female apprentice at her local in Indianapolis. She believes women can do the work, but they don’t know it exists and is readily available to them.

“Sheet metal work isn’t for everybody, and I’m not going to push it because that’s the career path I chose. The goal is to get more women into the building trades as a whole,” said Rogers, 25. “This is my time I could be spending with my kid, but I’m so passionate about it.”

Along her daily travels, Rogers’ friends and family aren’t surprised when she stops a waitress or female mechanic who has provided good customer service to encourage them to consider the building trades as a career. Rogers also works with local female journeywomen as well as women’s organizations such as Oregon Women in the Trades, Chicago Women in Trades and others to put her energy behind the movement. She also is a volunteer cast member for Built to Succeed, a collective partnership between building trades in Indiana to showcase the education and opportunities behind apprenticeship.

“I want to be the girl I needed when I got in the trade,” Rogers said. “I want to make it easier for women to get information about construction.”

When she isn’t working, going to school or participating with other organizations, she compiles pamphlets and folders for women she meets and delivers the information to them wherever they need. In 2017, Catie spoke to 30 women about the trade and conducted a tour at the Local No. 20 training center as well as Poynter Sheet Metal.

The USG and U.S. Chamber of Commerce Commercial Construction Index released its 2017 fourth quarter numbers on Dec. 11. The index showed 57 percent of contractors expected to hire skilled workers in the next six months and a large number reported stable or increased revenue expectations for 2018. However, 42 percent of contractors predicted that, although they will need to hire, finding skilled workers to fill those positions would be increasingly more difficult in the next six months, and 92 percent were concerned about available workers’ skill levels.

Rogers’ long-term goals consist of one day working for the union as an apprentice recruiter and visiting high schools like the one she attended in East Indianapolis, where many kids grow up to have far less than she does, to educate them on what they can accomplish if only they put in the work. After all, as a kid who came from an impoverished neighborhood, she is proof it can happen.

“I didn’t want to be a product of my environment. My family didn’t put me through school. It changed my life to become something other than a drug dealer. It changed my life to have benefits, to have a pension,” Rogers said. “I want to go to the schools where people think ‘those kids aren’t going to amount to anything.’ These kids have no other options – or so they think. Your life is a blank canvas and you have a paint brush. You can paint it any way you want.”