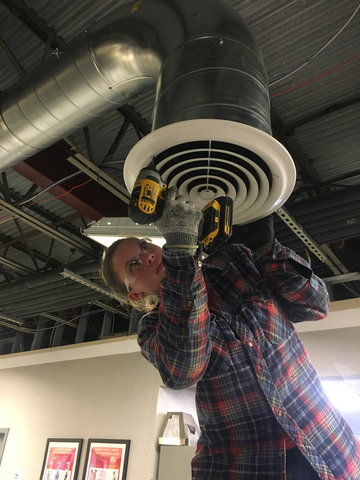 INDIANAPOLIS – The world of apprenticeships works much like academia — many good programs all try to recruit the same stellar students. In Indiana, instead of fighting for those students, training coordinators banded together to form Built to Succeed, a group created to increase awareness, education and recruiting opportunities for the building trades.

Formed in March 2016, Built to Succeed created a street team, known as cast members, made up of apprentices passionate about their programs, their careers, and more importantly, their futures. Marketing and social media campaigns featuring the cast members help get out the word that apprenticeships are higher education and come with a college degree upon graduation.

“We are trying to emulate how the colleges go about recruiting,” said Tim Myres, training coordinator for Sheet Metal Workers Local No. 20, which covers the state of Indiana. “We’re trying to make a bridge to all the schools, all the trades. We’re trying to work together as building trades rather than fight for the same students.”

Students accepted into any of the apprenticeship programs are encouraged to take a selfie with the hashtag, “I am Built to Succeed.” Through a partnership with the Indiana High School Athletic Association,, Built to Succeed’s cast members are featured in videos played at state athletic championships and cast members attend public events such as New Year’s Eve in downtown Indianapolis and Indiana Pacers games to spread the word.

“We can reach out to everyone associated with potential applicants, including students, parents, grandparents, teachers and administrators at one large event with our message at the same time,” Myres said.

Catie Rogers, 25, will graduate from the sheet metal apprenticeship this year and is a cast member with Built to Succeed. As the only female in the Indianapolis school, she tells anyone who will listen about her education, career and future. As a student, she just purchased a home for herself and her young daughter.

“In my eyes, if a young person is looking for a career, why not choose a career that pays you to learn, that gives you a pension, that provides you benefits? Why not?” she said. “The most important thing to do is show up every day on time and do the work. I think it’s a really great opportunity that other young people would take advantage of if they knew about it.”

In Central Indiana, the building trades’ directors of apprenticeship training often meet to discuss common challenges. Built to Succeed came out of one of those conversations.

“Sixty training centers, 15 different trades — we all sat down at the table and tried to determine the most effective way to market our trades,” said Jim Patterson, training coordinator for the International Brotherhood of Electrical Workers Local No. 481/National Electrical Contractors Association.

A potential apprentice can fill out one application, which will go to all participating building trades, a tactic also used by state colleges around the country.

“They now have one tool, one place to go to find out all the information on all the building trades. It’s taken a lot of steps out of the process,” Patterson said. “Through the common application, it’s allowed us to contact people right away who are interested. It’s a more effective means of communication, and we’ve seen a huge  uptick in applicants.”

A handful of 2017 high school graduates has already applied to the program, and “that’s never happened before,” Patterson said.

Those interested in Built to Succeed can visit www.builttosucceed.org.