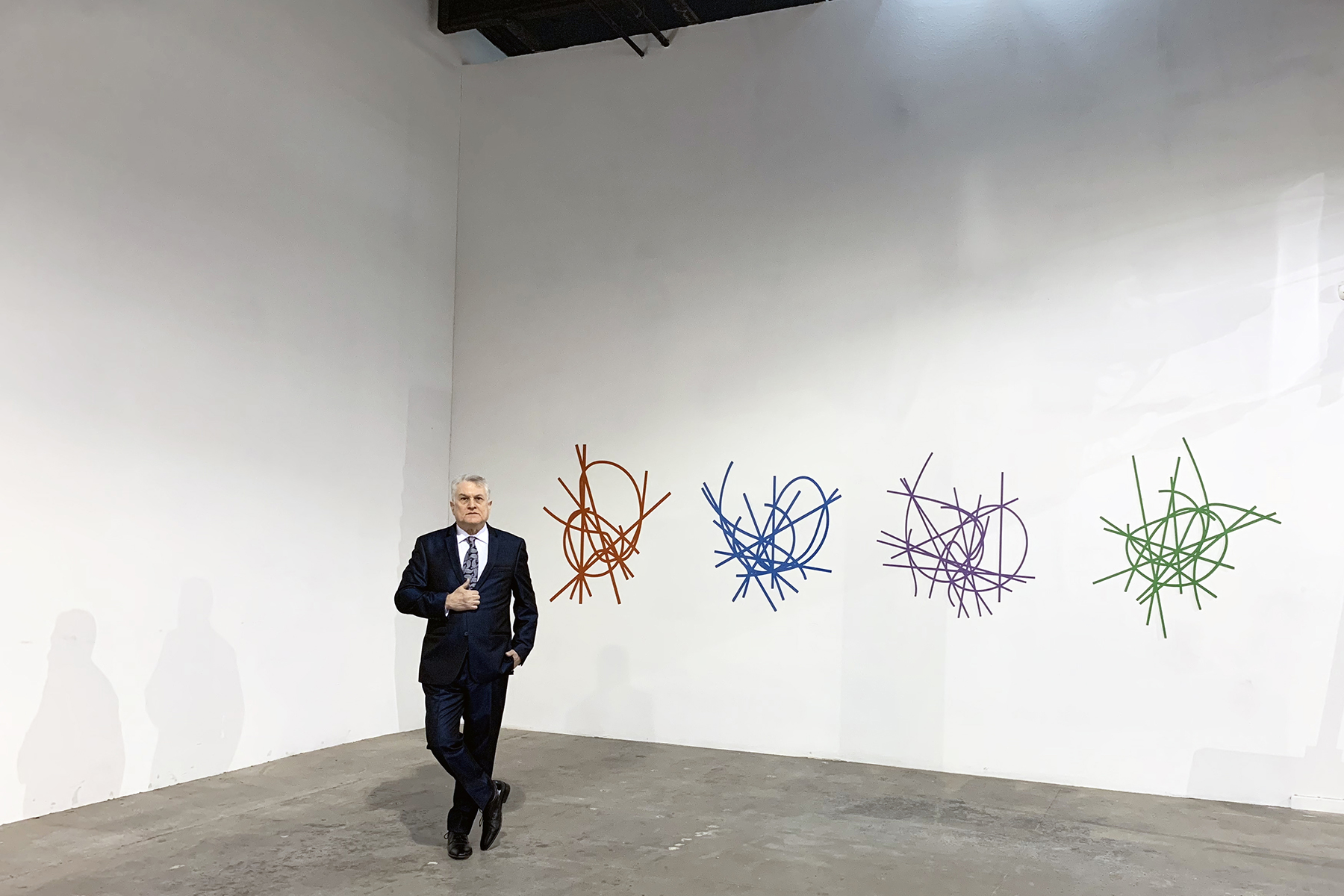 In new exhibition, surrealist returns to his roots — in the clouds

Prolific abstract artist and geometer Clifford Singer will showcase his latest works in the art installation, “Geometrical Clouds: A Mathematical Perspective to Surrealism,” from March 1 to April 29 in the lobby of the Foley Federal Building at 300 Las Vegas Blvd. The event is hosted in cooperation with iMuseum Vegas.

“Geometrical Clouds” is reimagined as a major theme in Singer’s life’s work, with his earliest pieces of that name dating back to the 1970s. This current iteration represents what Singer calls “45 years of process,” which, in principle, references the 19th century Neuberg cubic with plane curve, which describes a correlation between variables based on the usage, expressing a linear relationship when modeled, making a mathematical picture. The welded steel wall sculptures and painted works from the 1970s play on hyperspatial geometry and broken lattices, Singer noted.

The new “Geometrical Clouds” are produced in laser-cut steel and powder-coated with vibrant colors.

Singer credits Man Ray’s 1938 piece “La Fortune” as an inspiration for this exhibition. The Whitney Museum of American Art describes this piece, showing a billiard table stretching toward the horizon with different colored clouds in the sky, as “a landscape of the mind, a product of the artist’s vivid imagination” that also evokes games of luck and chance. Like other surrealist artists, Man Ray thought of the creative process like a game, espousing a playful approach to problem-solving.

Echoing Man Ray, Singer stated that for him, “The process is the result. I’m involved in each step in the making of art, starting with stretching my own canvas.” While satisfying, creating the pieces in Geometrical Clouds is not a simple game.

“My work is a mental exercise,” he said. “These pieces are extremely difficult to do.”

Singer’s work is featured in the collections of New York’s Museum of Modern Art (MoMA), the Aldrich Contemporary Art Museum, the Boca Raton Museum of Art, the Lincoln Center/List Art Posters, IBM, Mobile Oil Corporation, the Bridges Organization, as well as those of many publications and universities. The larger, laser-cut steel pieces and large-scale paintings Singer produces can take up to four or five months, and all his works are informed by geometry — a major interest of Singer’s since boyhood.

In a 2012 abstract, Singer wrote, “While the geometric style in the broadest sense can be classified in the art world as ‘geometric abstraction’, what actually takes place on the picture plane between form, space and color goes far beyond the limitations of such arbitrary labels. The work evokes ceaseless mobility, speed, time, space, growth, compression, tension, attraction and the infinite nature of pure mathematical elements. In the painting, I suggest the dynamics of a space that continually expands the structure and geometrical fragmentation in space-time. Line segments in the universe are interconnected, even when they appear to be separate from one another. In space-time curvature, the geometrical signing through collinearity illustrates a deformation of space.”

In a later interview, he added, “There are divine proportions in geometry defined by ratio that are elemental, that emit certain resonance. Architects use these to make the environment more pleasing. This is seen in “The Diagonal, 1919” by Jay Hambidge. As humans, we apperceive certain proportions that feel good both on a conscious and a subliminal level.”

Singer suspects the desire to explore and create with mathematical concepts might be in his genes. While his family tree is full of architects and draftsmen, his mother was an artist and his second cousin, Mortimer Leach, was a lettering specialist. Upon graduating with his bachelor’s degree from Alfred University in New York, he went on to earn his Master of Fine Arts degree from The City College of New York (CUNY).

After spending his formative years in a Broome Street loft in the celebrated arts neighborhood of SoHo in New York City, Singer left in search of new surroundings after 9/11. He settled in Southern Nevada in 2004 to teach mathematics at, what is now, Fremont Professional Development Middle School and Academy of Medical Sciences. Now retired from education, he pursues his art on a full-time basis.

More information on Singer can be found at CliffordSinger.net. For additional information about available artworks for sale, see Artsy.net and Printed-Editions.com.