Instructed by Chef Brenda Hitchins, who worked professionally in the culinary industry for more than 30 years, students learned skills such as using an air brush, making stained glass out of jolly ranchers, building a structure that will stand, learning how to cast, pull and blow sugar, making figurines and decorations out of fondant and modeling chocolate and much more.

Sixty seniors formed into 17 groups, with each group completing a house. Students started their projects on Oct. 13 and had seven class periods – which are 170 minutes apiece – to complete their projects. Some students came in during lunch or an open period or after school to spend extra time working on their houses.

Once the structures were built, the students then had to market their structure to get other students to vote through polleverywhere.com. The voting took place Nov. 5-7. 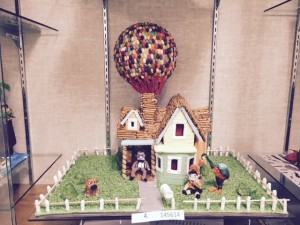 The winner of the contest was “Up,” which depicted the house and characters from its namesake movie. Students on the winning project were:  Desirae Lucero, Courtney Minter, Issac Harden, Jackie Arriaga, Bree Nordstrom and Roxanne Jimenez.

Houses will be on display at Northwest Career & Technical Academy, 8200 W. Tropical Parkway, until Wednesday, Nov. 26, upon which some of the houses will be donated to Opportunity Village.

Hitchins joined the Clark County School District in 2010. During her 30 years in the culinary industry, the Las Vegas native worked in mostly pastry-related capacities at venues ranging from Caesars Palace to the Rio. In 1993, she became the first woman to be named “Chef of the Year” by the Las Vegas chapter of the American Culinary Federation.

Located in North Las Vegas, the Northwest Career and Technical Academy is a 5-star school and a Magnet School of Distinction. It is in its seventh year of operation with students in grades 9, 10, 11 and 12. It is a magnet school that serves a diverse student body. The student population is more than 1,800 and has a student/teacher ratio of 28/1.