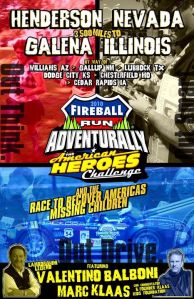 The Fireball Run Adventurally & its Race to Recover America’s Missing Children, an annual road rally exclusively comprised of progressive business leaders, chose Henderson as the beginning of its 18-city interactive journey across the country to remind the country that, struggles with the economy aside, Southern Nevada is “open for business.”

The annual event has partnered with the KlaasKids Foundation in the Race to Recover America’s Missing Children, which has already aided in the recovery of 32 missing kids in the United States. Each team will rally across the country with one missing child featured on their car and distribute fliers along the entire 3,500 mile route to raise awareness. Similar to the popular television show, “The Amazing Race,” the nine-day interactive rally will feature clues to secret destinations and missions. The teams will earn points based on the successful accomplishment of their assigned missions as well as speed on several closed course track events. A winner will be named during a banquet at the end of the race in Galena, Ill.

The Henderson Chamber of Commerce has partnered with the rally organization to bring awareness to the race as well as to help recover missing children. The City of Henderson is also a collaborative partner for the September rally event.

In addition to Sanchez, City of Henderson Mayor Andy Hafen and Kirk Clausen, chairman of the Henderson Chamber, will speak at this press conference and will discuss the importance of keeping America’s missing children top of mind.

The Henderson Chamber of Commerce is a non-profit voluntary organization committed to promoting and supporting member businesses.

For more information on Fireball Run, contact the Henderson Chamber of Commerce by calling 702-565-8951 or visit hendersonchamber.com.