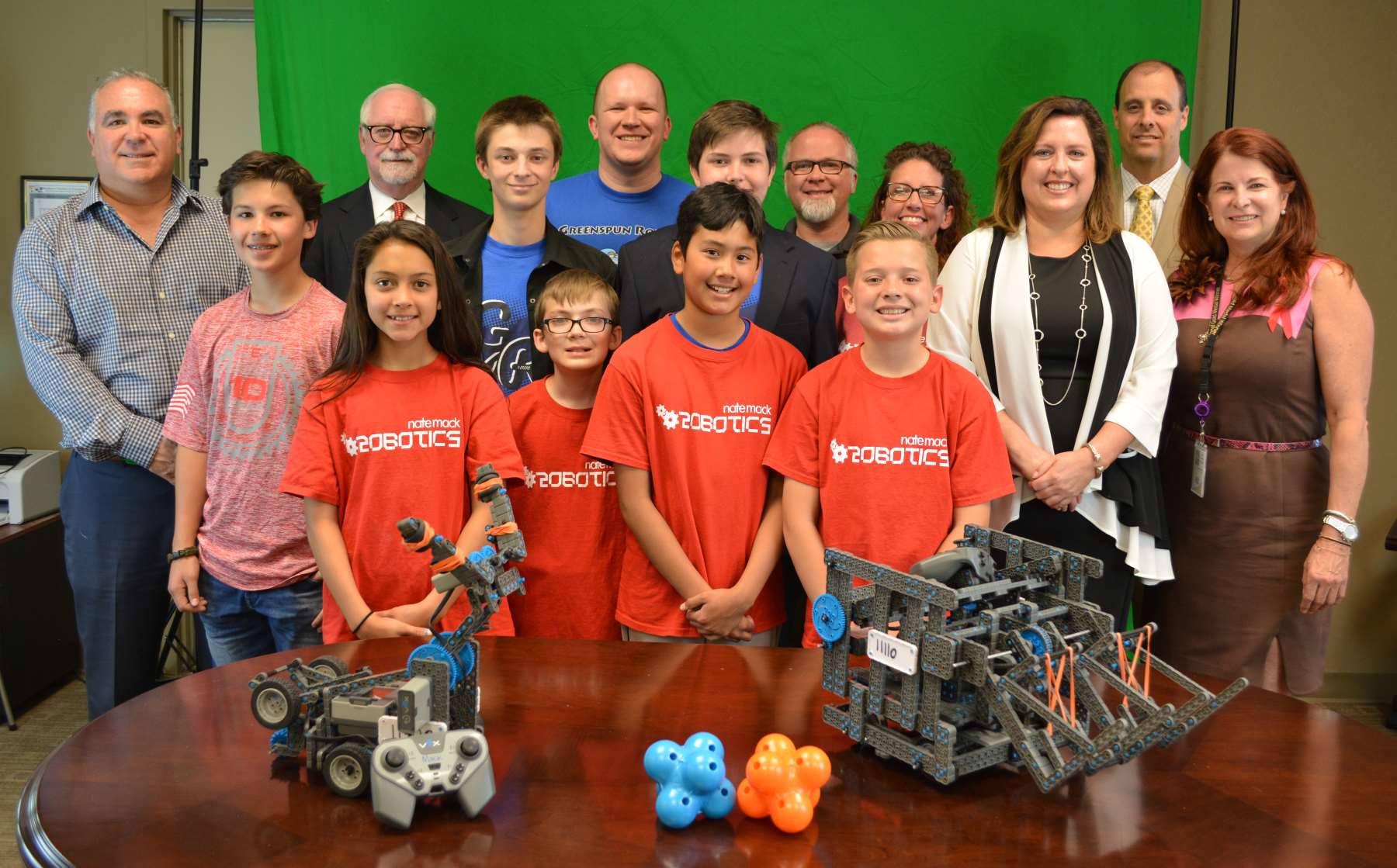 Henderson business community donates more than $15,000 to local robotics teams, is already prepping for next year

HENDERSON, Nev. – When Nate Mack Elementary School robotics team coach Casey Juliano contacted the Henderson Chamber of Commerce in March for help fundraising enough money to get her students to Louisville, Kentucky, she had no idea the kind of partnership and support her students — and those from the Greenspun Jr. High and Basic Academy of International Studies teams — would get from Henderson’s business community.

Sometimes, funding can be difficult for schools in middle class neighborhoods; those in more affluent neighborhoods are funded by the families of the children who attend the schools, while those who attend Title One schools receive funding from the government. The Henderson Chamber of Commerce Foundation launched an initiative, Biz + Bots, to begin rallying support for the three public school teams.

In one evening, the Henderson Chamber of Commerce Foundation raised $12,500 to help the three robotics team students represent Nevada at the 2017 VEX Robotics Worlds Competition in Louisville, Kentucky at the end of April. Additionally, Mayor-elect Debra March donated $1,000, and Tronox donated $2,500 to Basic High School outside of the foundation’s efforts. The foundation’s goal was $11,000.

While the students didn’t win at the competition, the lessons they learned were much more valuable. For example, when the Nate Mack students arrived in Louisville, their robot didn’t initially pass inspection (it was an inch too big when open), which meant the kids had to come together and rebuild and reprogram the robot right away, then practice driving their new robot. The team’s programmers programmed into the wee hours of the morning and got the highest score they personally had ever gotten.

“We had some matches that were amazing and strong, and some that did not go in our favor, but throughout it, they did not give up and worked as a team,” said Juliano, who will actually be changing positions from third grade teacher to STEM (science, technology, engineering, and mathematics) librarian this fall. (Nate Mack is converting its library to a STEM library.)

As a result of the schools’ great experiences this year, all three are expanding their robotics clubs’ presence for next year. Nate Mack is specifically able to expand because of the Henderson Chamber’s support, which will continue into the future. Additionally, next year Nate Mack will be adding its first all-girls team to its roster.

The Henderson Chamber has adopted the three schools’ robotics teams for continued fundraising support, which will begin again this August.

“These robotics teams are preparing students — as young as elementary school — for jobs that are currently changing the face of the manufacturing industry,” said Scott Muelrath, president and CEO of the Henderson Chamber of Commerce. “It absolutely behooves the Henderson Chamber to support our city’s future workforce by helping them go as far as they can.”

This is especially important in a place like Nevada, which is currently underprepared to produce a robust STEM-qualified workforce. The STEM-related economy is growing significantly faster than the nation’s economy as a whole, according to “Nevada K-12 STEM Pipeline,” an article by UNLV College of Education instructors David Vallett, Ph.D., assistant professor, and P.G. Schrader, Ph.D, professor. Currently, within Nevada’s elementary schools, an average of only 15 percent of classroom time is dedicated to science instruction, the paper reports.

“Too few Nevadans consider STEM careers in large part because they are not exposed to STEM education as students or are not made aware of the many exciting career opportunities in STEM available to those with some postsecondary education,” says the State of Nevada’s Advisory Council on Science, Technology, Engineering, and Mathematics – STEM in its 2016 Strategic Plan.

Supporting the local manufacturing industry’s future workforce is directly in line with the goals of the Henderson Development Association, the chamber’s economic development arm.

“Being involved in a robotics team encourages excitement for STEM-related jobs, as well as teamwork, innovation and more,” Muelrath said. “These are all qualities businesses look for as well. We’re excited to support these young professionals on their journey to becoming our future business leaders.”

The Henderson Chamber of Commerce Foundation is a nonprofit 501 (c)(3) corporation organized to manage and distribute funds and resources to further the development of the community through activities that are exclusively charitable, scientific or educational. Donations are tax deductible to the fullest extent allowed by law. The Foundation is responsible for the creation and success of both the Henderson Business Resource Center (a business incubator) and the Leadership Henderson program.

For more information about the Henderson Chamber of Commerce Foundation, visit www.hendersonchamber.com.