Galleria at Sunset to celebrate new expansion with groundbreaking 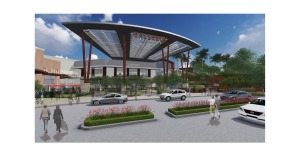 HENDERSON, Nev. – The Galleria at Sunset, 1300 W. Sunset Road, will host a groundbreaking ceremony for its new expansion project at 2 p.m. Thursday, March 27, at the mall’s south entrance between Red Robin and Chevy’s.

With the mall’s renovation nearly complete, the Galleria at Sunset is moving forward with the second phase, a $24.1 million, 30,000-square-foot expansion, which will consist of up to six new restaurants, new valet and a 12,000-square-foot outdoor plaza, including a new main entrance. Additionally, all mall entrances will be renovated and given a fresh and modern appearance and feature the center’s new logo. This is the second expansion project in the mall’s 18-year history.

“The expansion is a sign of great things to come,” said Heather Valera, director of marketing at the Galleria at Sunset. “We are excited to welcome Bravo! and Larsen’s since this will be their first and only Vegas Valley locations, as well as welcome a favorite such as the Sugar Factory. These new restaurants are a great complement to an already exciting shopping experience.”

The Galleria at Sunset opened in 1996 and is anchored by Macy’s, JCPenney, Dillard’s, Kohl’s and Dick’s Sporting Goods. It features retailers such as H&M, Coach, bebe, Buckle, Forever 21, Abercrombie & Fitch, Victoria’s Secret, and more. Galleria at Sunset is co-owned by Forest City Enterprises and QIC and managed by Forest City Enterprises. The 1,048,000-square-foot regional shopping center is the only enclosed mall in Henderson and one of the largest in Southern Nevada. In addition to retail, the Galleria at Sunset boasts two full-service and 11 fast food restaurants.

For more information on the Galleria at Sunset visit galleriaatsunset.com or contact the mall’s information center at 702-434-0202.