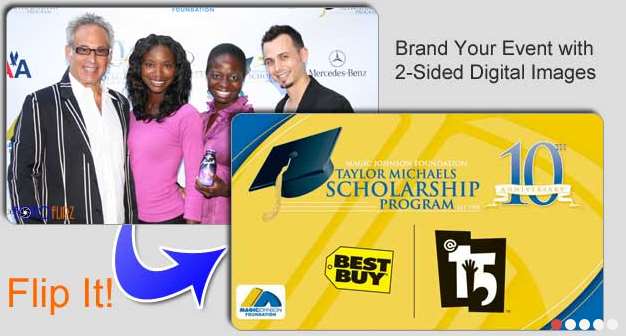 HENDERSON, Nev. – Encouraging patrons to “check in” on social media is a decent way for businesses to gain more exposure, but what about events – as well as event attendees – wanting to raise awareness just as instantaneously? As they say, there’s (now) an app for that.

Southern Nevada-based FotoFlipz, a leader in mobile-enabled social media engagement, will present its new app at the 31st Annual Imagen (sic) Awards, which will be held at the Beverly Hills Hilton, 9876 Wilshire Blvd, at 6 p.m. Friday, Sept. 9.

A sponsor of the event, FotoFlipz will utilize its patent-pending technology to provide Imagen 2016 attendees with more than just a souvenir picture; the attendees will have an opportunity to place the Imagen 2016 logo and a personalized audio track on the “Flipz” side of every “Foto” shot with the FotoFlipz oversized, instantly recognizable smart phone. (See examples here.) Fotos will be instantly emailed to attendees’ smart phones for easy sharing.

“Imagen embodies all the qualities that make this an ideal collaboration,” said Rodney Van Johnson, FotoFlipz founder and CEO. “Imagen fosters social responsibility and accountability, things we care deeply about. Using FotoFlipz to help spread the message of hope and equality for Latinos in broadcasting makes perfect sense. The message of Imagen 2016 will travel the social media networks, with the added benefit of event and sponsor branding that will help bring new attention to the work of the Imagen Foundation.”

Van Johnson added that Imagen attendees will want to remember this night, and will want to share their participation in this event with their friends, co-workers and family. “FotoFlipz will bring the attendees, Imagen 2016 and the sponsors together with a social media platform that serves everyone’s objectives.”

FotoFlipz is a leading provider of social media engagement solutions that fully leverage the viral component of social media networks through the company’s unique ability to brand the “flipz” side of an image. Offered as an app for all popular smart phones and tablets, the solution is utilized by internationally recognized non-for-profit charities, advertising agencies, companies and consumers.

The Imagen Foundation encourages the positive portrayals of Latinos in all forms of the entertainment media and rewards the excellence of those entities or individuals whose productions elevate the image and status of all Latinos. The Foundation also works to enhance opportunities for all Latinos in front of and behind the camera, and serves as a liaison between the industry and the Latino community by providing access, education, and resources.