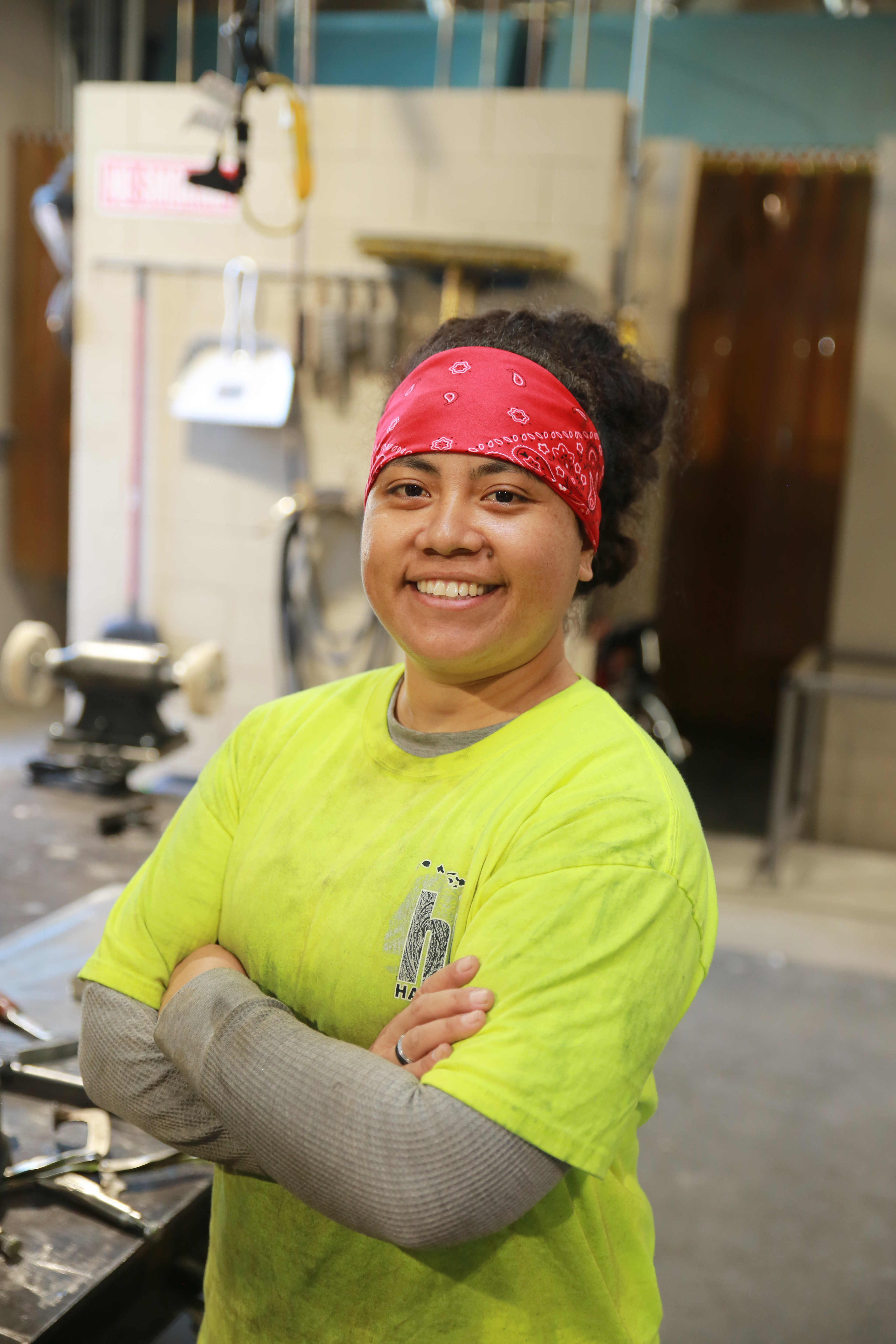 Motivation, hard work makes Etimani stand out from the guys

LAS VEGAS – Marina Etimani has bachelor’s and master’s degrees but the native American Samoan found her niche as a second-year apprentice with the Sheet Metal Workers Local 88 Apprenticeship Program.

She worked for Home Depot, Target, the Labor’s Union and as a fishery plant supervisor in Alaska, but home is in the shop working on a stainless vase, in the classroom working on her core classes or at work at Bombard Mechanical running the spiral duct machine.

“Marina voluntarily signed up for stainless class,” said instructor Steve Vantine. The class is normally taught to only third- and fourth-year apprentices. “She wanted to make vases. She found an image on Google and everyone wanted one when she was done – including my wife.”

Self admittedly, Etimani didn’t know much about sheet metal work, but the entrance exam and interview were intriguing enough to entice her to stay and figure it out. What she learned was that it’s more than just heating, ventilation and air conditioning (HVAC) and ductwork. Welding, 3D building information modeling (BIM)/CAD, and testing, adjusting and balancing (TAB) are all sheet metal specialties she wants to add to her tool belt.

“A lot of people don’t know all the aspects of our trade,” Vantine said. “They think of ductwork and a lot of screws. No, there’s a lot more to it than that. If you were decent at every part of our trade, you’d be a genius in my mind. There is so much knowledge you need to know.”

For example, instead of using or buying ready-materials, much of what sheet metal workers build is created from flat sheets of metal.

“The things I see, the things I do, I never thought sheet metal workers could do that,” she said. “I didn’t know until I put my hands on it that we build it.”

One of the first lessons Etimani learned during her apprenticeship was to take every opportunity to learn a skill. The more skills you have, the more employable you are, she said.

“The opportunity is there, so I may as well take it,” she said. “What’s cool is to have people believe in me.”

Etimani originally moved to Las Vegas in 2003 to help her brother with a new baby. Like many, the recession proved problematic, so she took a job on a fishing boat in Alaska. Once they found out she was trained in workplace safety and OSHA regulations, she became a safety supervisor at a fishery plant. She waited out the recession for four years in Alaska before returning to Las Vegas in 2016.

Growing up with seven brothers, Etimani isn’t fazed by being the only female in her class or on a job site. While she’s come across a few disrespectful people, like in any job, for the most part, the experience has been pleasurable and she has found great mentors in her co-workers and instructors. Many times, females don’t research the sheet metal trade because they don’t realize it’s a viable option for them, she said.

“Their mindset may be it looks so hard. If I can do it, they can do it, too,” Etimani said. Hanging ductwork in 120-degree heat isn’t the only job. Etimani’s career goal is to use 3D BIM to design ductwork.

“When I came back from fishing, I knew I wanted to get back into the union. I’m glad they called me. I like it. I’m going to stick with it.”

The Sheet Metal Local No. 88 Training Center, located at 2540 Marco St., is one of 153 similar facilities throughout the United States and Canada. Its four-year program trains apprentices in the classroom and shops, through partnerships with local signatory contractors, on the job site. Upon completion of the program, apprentices can graduate with an associate degree in applied science, a career and zero college debt.

Apprenticeship candidates include those with good spatial recognition as well as math, trigonometry and problem-solving skills. Sheet Metal Local No. 88 accepts applications the first Tuesday of every month. The center also serves as an instructor training facility for the International Training Institute — the education arm of the unionized sheet metal, air conditioning and welding industry — which provides training materials for the school.

For more information about Sheet Metal Local No. 88 Apprenticeship Program or to apply to become an apprentice, visit 88training.org or call 702-632-3014.