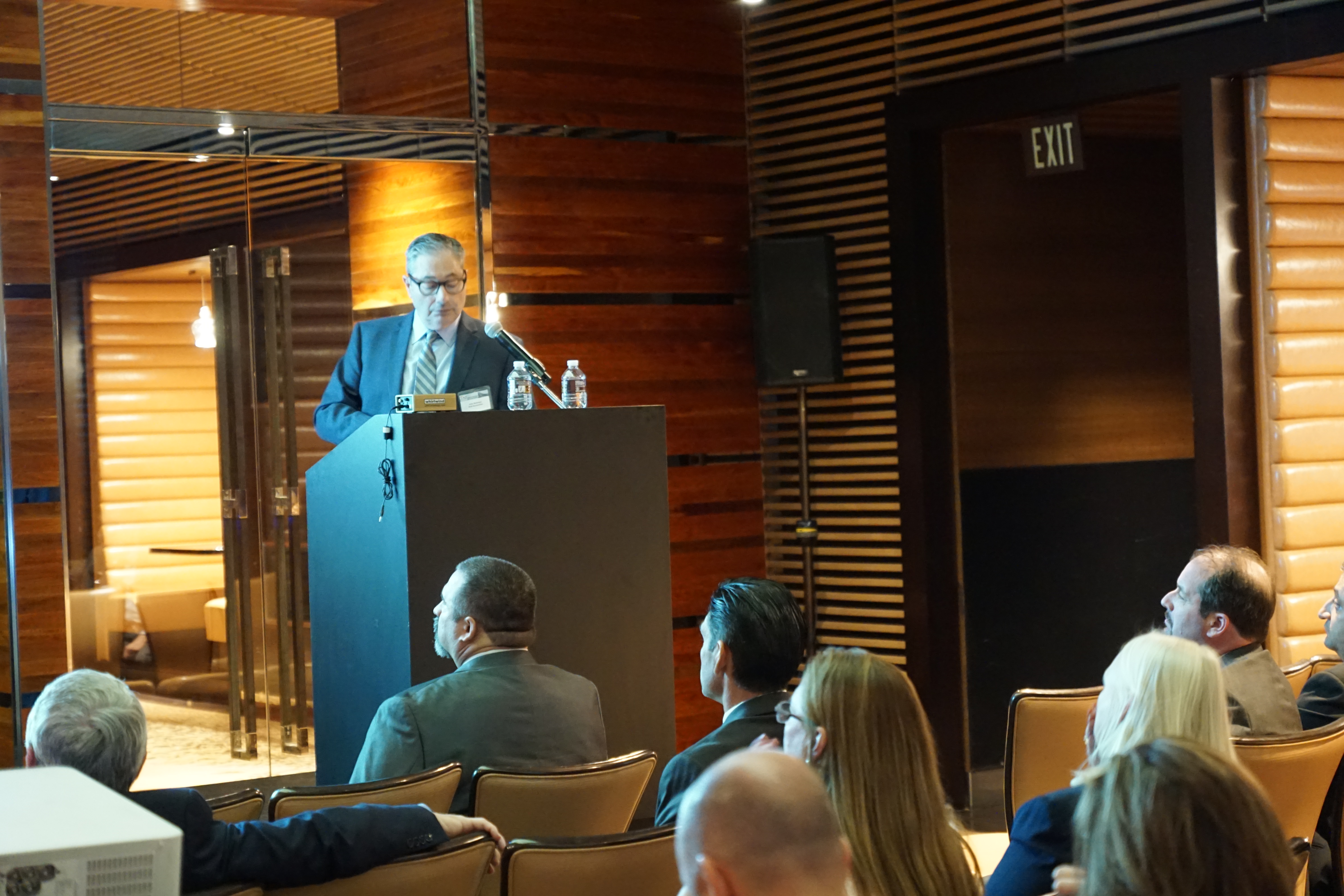 HENDERSON, Nev. – In a climate of doubt and uncertainty, any nugget of objective economic information and analysis is worth its weight in gold. Tuesday night’s InSight 2017 event, presented by the Henderson Chamber of Commerce, offered up extensive insightful data for more than 100 chamber board members, tiered sponsors and other invited guests at the third annual presentation, held at the LUX venue atop the M Resort.

PeQueen kicked off the presentation with an international assessment, narrowing the focus to the United States before turning the mic over to Restrepo for detailed statistics on how Henderson is trending and performing.

“As business leaders, we need to learn how to react and respond to an unconventional situation,” PeQueen said in his opening remarks.

This includes major Trump economic initiatives that have the potential to impact business:

“The possibility of corporate tax reform is why the stock market has been going up the last four months,” he said. However, Trump’s tax plans “don’t care about the deficit. Who is paying for this is unclear.”

PeQueen advised his audience to pay particular attention to the border adjustable tax (BAT), one of the main components of Trump’s corporate tax reform plan. The BAT is a destination-based cash flow tax that is levied on imported goods based on where they are consumed rather than where they are produced. The tax’s creators argue that the surge in foreign demand for U.S. exports will strengthen the value of the dollar; in turn, a strong dollar would increase the demand for imported goods, so that the net effect on trade is neutral.

“That’s the theory,” he added. “But it’s never been tested.”

Regarding the possibility of an international trade war, he said, “A trade war would hurt the country as a whole and Southern Nevada specifically. It makes everyone a little bit poorer.”

Free trade, on the other hand, “helps a lot of people in modest amounts but significantly hurts a smaller group of people by displacing them from their established occupations.”

Speaking of manufacturing, PeQueen debunked the myth that the United States doesn’t make anything anymore.

“The manufacturing sector has held its own for many years, the difference being that it takes fewer workers to produce the same amount of goods,” he said. “We are losing many more jobs to automation than to overseas workers.”

The United States, he said, is still a manufacturing powerhouse, a close second to China.

How does all of this global data impact the local economy? As a city, Las Vegas is more susceptible than most “because of our international component,” PeQueen said.

Bottom line: “Any president has less impact on the economy than you would think.”

Overall, confidence in the economy depends largely on which side of the political aisle one sits on.

“Republican confidence has soared,” PeQueen said. “Strong Trump followers are much more optimistic about the economy than we’ve seen in years.”

As such, they are much more willing to take business risks than their Democratic counterparts. His advice?  Try to find out where your customers and clients stand.

No matter what happens legislatively, one thing is clear.

“The year ahead is going to be amazingly busy,” PeQueen concluded.

Zeroing in on Henderson, Restrepo delivered a simple yet optimistic message. “Henderson is back!”

All in all, both presenters’ messages, while a mixed bag, provided guarded optimism for the coming year.