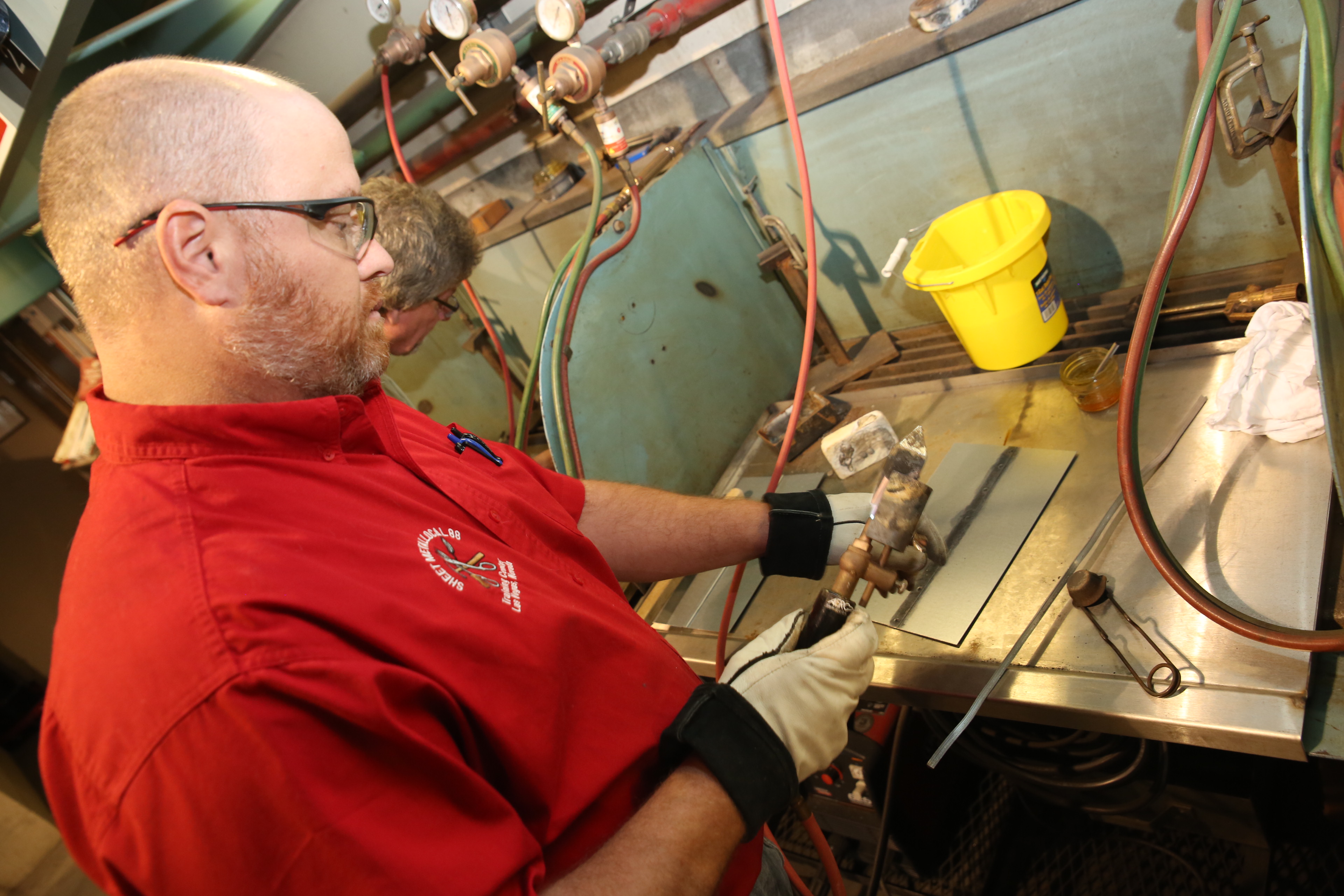 Architectural work a source of pride for sheet metal workers

This pride doesn’t stop at the end of the day with a job well done or the brotherhood that comes from being a union member. It comes from having a tangible, visual end result of all the hard work. Something friends and family readily understand – a professional football or baseball stadium, the 9/11 Memorial and Museum and the Gateway Arch in St. Louis.

Unlike many elements of the trade, which are hidden from the public eye, architectural sheet metal work can be pointed out, as if to say, “I did that.”

In fact, sheet metal workers have been saying those words for 128 years, as the union was conceived as the Tin, Sheet Iron and Cornice Workers’ International Association, with roots in architectural sheet metal in 1888.

A fear among architectural sheet metal workers is their craftsmanship will retire when they do.

“If you lose it and you don’t train it, all that’s left is the book, and you can’t learn it all from a book. You have to see it, feel it,” Tamboles said. “You can’t teach that in one class. It takes experience, but if you don’t get people to do it, it’s going to be gone.”

The International Training Institute (ITI), the education arm of the unionized sheet metal and air conditioning industry, which includes architectural and ornamental, hosts curriculum and training for instructors and coordinators in hopes schools without architectural programming will consider it, and those with programs will increase interest in the craft.

It’s all a part of the push by SMART to remind sheet metal workers of their roots and a specialty that is small in numbers and high in demand from contractors.

In southeastern Michigan, only 10 to 12 percent of union sheet metal workers specialize or can skillfully work in architectural sheet metal.

“They’re a special breed,” said Glenn Parvin, president and owner of CASS Sheet Metal in Detroit. “Your guys in the field have a way of knowing what can and can’t be done and what should be done. Architectural sheet metal workers like their trade. They want to be outside. They don’t want to be inside hanging ductwork.”

CASS Sheet Metal has worked on everything from historical restoration projects to modern works, including upcoming work on the new Detroit Events Center, future home to the Detroit Red Wings. When a church steeple nearly toppled during a wind storm, the company was called to task. Not only did they have to figure out how to fix it, they had to secure it safely in the meantime.

“Every job is so uniquely different, and we involve ourselves in such a variety of installations, and they’ve only gotten more challenging,” Parvin said. “I think the creative side comes in as problem solving in how you implement the project.”

Restoration work on the Michigan state capitol required more than 2,300 custom cut and stamped pressed ornament balls created as the originals were in the 1800s. The challenge – research and perfect the craftsmanship while keeping the job efficient and on time.

Like any industry, sheet metal has its specialties, and architectural sheet metal is suited for certain interests and skill levels. It’s seen as the creative side of the trade, but where those skills are most useful is in the creation and installation of other people’s work.

“Every building has its unique feature the architect is trying to incorporate, and that’s usually done by sheet metal workers,” Caricato said. “A lot of times, the architects know how to draw it, but they don’t know how to build it. There’s a first time for everything usually with an architectural project. You have to take the vision and create it.”

Lack of experience and knowledge separate today’s apprentices with current journeymen on the job. While the true architectural sheet metal education comes from hands-on experience, interest is piqued in the classroom.

“The way to get hooked is the pride of when you’re done,” Tamboles added. “You have to get them young when they first come in, and you have to catch their attention. Once you bring them outside and you assemble something – when they see it come together – they take photos and show it to their friends.”

During a recent class, Tamboles emphasized detailed work by teaching his class how to hand-cut and create copper flowers. Light bulbs went off. Students started to understand the creativity, detail and craftsmanship it takes to do the work.

“I’ve taught them miters. I’ve taught them siding. They want to know how to make flowers to take home and show off,” he added with a laugh. “Once they see it come together, they get serious about it and focus on it. All of a sudden, these tough guys from rough neighborhoods are making roses and lilies. They lost their minds.”

In all seriousness, although crafting copper flowers seems small, it speaks to the heart of pride. And the exercise wasn’t too far off from actual projects. While working his current project – the restoration of The Dakota in New York City – Tamboles will hand craft 250 copper clad dormers over a 3.5-year period.
“It’s nice to look at something you’ve built,” said Jason Bowers, who is nearing his fourth year of apprenticeship at Local No. 206. “There’s a college downtown, and I’ve put my hands on every panel on the outside of that building. I can show people and say, ‘I built that.’”
The sense of accomplishment architectural sheet metal workers have always felt when pointing out their work to friends and family has been updated with the advent of social media. In San Diego, Caricato has seen his apprentices gravitate to the work because of the instant gratification – not only for themselves, but what they can share instantly with their circle.

“You have immediate recognition of what you did that day. You’re going to see it,” Caricato said. “At that point, it’s not about the paycheck. It’s about passion.”

“You feel that sense of accomplishment every day when you’re done,” Tamboles added. “We all work on different jobs, but we know everyone in our specialty. We’re sending photos back and forth.”

Jesse Spencer, field superintendent with A. Zahner Co., has moved 40 times in 18 years with the company, overseeing projects from Alaska to the Bahamas. The company has worked on the 9/11 Memorial and Museum, along with other notable buildings. Recently, Spencer finished up work on the Peterson Auto Museum in Los Angeles, where the outside metal skin of the building was renovated with 318 stainless steel ribbons which wrap the façade.

“Zahner is very driven with the visual aspects of architecture, where other facets of the trade may not so much,” Spencer said. “We make these monumental projects, but not everything we do is necessarily at such a large scale. It doesn’t have to be for a building that is a big monument. It can be something on somebody’s house. It’s creative and rewarding to look and see what you built.”

“It’s a meticulous trade. You have to pay attention to detail because everyone else sees it, too,” Caricato added. “It’s like a billboard every time you finish something. You’re advertising what you do every time you install something.”

For a growing specialty, the craftsmen of today are seeking the journeymen of tomorrow.

“That’s the beauty in architectural sheet metal – when someone can notice the beauty in it,” Parvin said. “It’s a growing industry. It’s growing in Detroit again. Finally.”