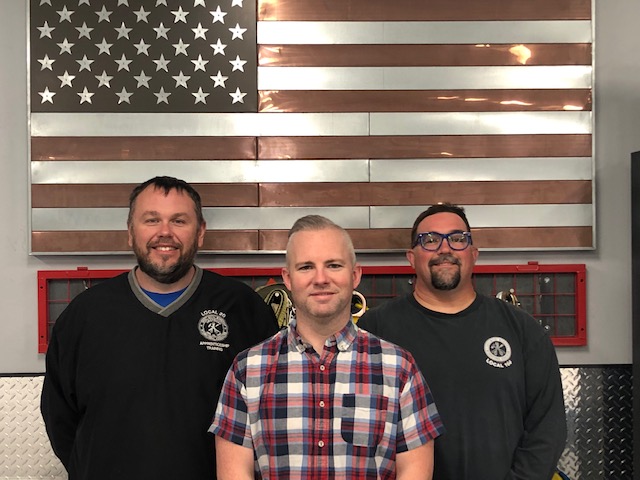 When first-year apprentice John Walker returned to Sheet Metal Workers Local 20’s Indianapolis training center after lunch in January, he didn’t feel well — his legs were shaking, he was lethargic and his arm was tingling. Self-admittedly stubborn, Walker sat in the back of class and tried to catch some shut-eye before class began, but he couldn’t get comfortable.

Despite repeated questions from his classmate, friend and co-worker, he insisted he was fine. Until he wasn’t.

Luckily, Jeremy Miller caught Walker as he fell to the ground, preventing him from hitting his head. That’s where Walker’s memory fades and the fast actions of Local 20’s instructors, apprentices and staff took over. The 29-year-old had stopped breathing.

“Someone said, ‘Sean, you have to do something. He’s gone,’” said Sean Webb, instructor at Local 20.

“He was determined I wasn’t going to leave,” Walker added.

Webb and Ricky Coleman, instructors at Local 20, had finished CPR and first aid training with the apprenticeship class the week prior. As Webb began chest compressions on Walker, apprentices cleared the room, called for emergency services and ran to get other instructors, who jumped in to help. Joe Potesta monitored his pulse while Coleman fetched the automated external defibrillator (AED) they received last summer from the Sheet Metal Occupational Health Institute Trust Inc. (SMOHIT), the health and safety arm of the union.

“The reason why everybody did what they were supposed to do was because Sean was in complete control,” said Jason Benson, Local 20 training director. “I stood back and watched these guys work. It was pretty impressive. I’m very proud of them.”

Webb described the incident as “textbook” due to the training. In the first three months of 2021, CPR and first aid had been taught a handful of times: “Without the constant teaching of CPR/first aid training, we wouldn’t have known what to do,” he said.

Emergency services arrived and took Walker to the hospital.

“I woke up to my instructor giving me chest compressions, and I took a huge gasp of air,” Walker said. “I guess I stopped breathing four times. It was wild.”

An athlete all his life and a former cage fighter, Walker found out he had Wolff-Parkinson-White syndrome, where an extra electrical pathway between the heart’s upper and lower chambers causes a rapid heartbeat, in his mid-20s. A medical procedure fixed the problem, and Walker now is on the mend as doctors try to decipher the next step.

The husband and father of two young children, Walker is glad if it was going to happen, it happened at the training center where people he trusted knew how to keep him alive.

“If it wasn’t for those guys, or if I had been on a roof working, I can’t imagine how that would have gone down,” Walker said. “I was definitely in good hands. To this day, I can’t thank Sean enough for how immediate he was able to get everything going. I owe that guy my life.”

“What they did really shows the brotherhood and sisterhood of the union. They saw one of their members down, and they jumped in,” Clark said. “I know a lot of locals don’t teach CPR, and they leave it up to the contractors to teach it. All locals should teach CPR. It’s a team effort, from the instructors getting the training to SMOHIT providing the AEDs.”

Walker said he doesn’t mind being the example used in future classes about why CPR is important. The more people at the local who know his story, the more lives it will save.

“I feel like the apprentices take it a lot more serious than maybe they did before,” Webb said. “It’s definitely brought the class together.”

Until he’s back to 100%, Walker can’t drive, go back to work or attend class. And that’s OK, Walker said.

“They’ve all been extremely patient with me. They treated me like family, and they’re still treating me like family,” Walker said. “A lot of places wouldn’t do that.”

Apprentices receive training in AutoCAD, air balancing, refrigeration/service, welding and heating, ventilation and air conditioning (HVAC) design, fabrication and installation. While they are learning in the classroom, they are gaining skills on the job site including installation of architectural sheet metal, kitchen equipment and duct for heating and air conditioning systems in residential and commercial buildings.

The goal is for apprentices to graduate with zero tuition debt and a career to last a lifetime. More than 14,000 apprentices participate in 148 training centers across the United States and Canada, learning curriculum and using the free training materials provided by the International Training Institute (ITI), the education arm of the unionized sheet metal, air conditioning and welding industry.